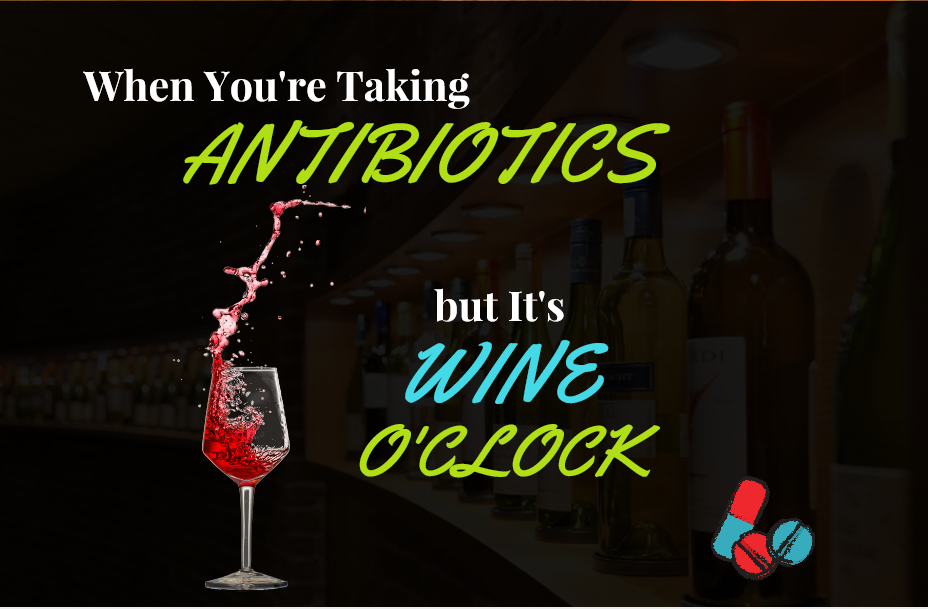 What’s the most common question a pharmacist gets asked?

I can’t speak for all of us, but for me, without a doubt, the number one question I get asked is “Can I take [insert medication name] with alcohol?” (second only to, “I have a cold. What should I take?”)

More often than not, people specifically want to know if they can take pain medications (like Tylenol or ibuprofen) or antibiotics when they are going to be drinking alcohol.

It’s actually a GREAT question, and I’m glad so many people think to check first.

25,000 emergency department visits a year are a result of bad

reactions between drugs and alcohol.

That’s 25,000 ED visits that absolutely did not have to happen. So it really is important to know whether you should skip happy hour if you’re taking a certain medication.

In order to keep any of you from ending up in the hospital because you mixed the wrong drugs with alcohol, I’m going to share with you 12 drugs you really should not take with alcohol.

drinking alcohol at the same time.

Drugs stay in your system for longer than you realize.

Alcohol can interact with the drugs hours after you’ve taken them.

Why shouldn’t you mix medications and alcohol?

Well, there are several different ways alcohol may cause a bad reaction if taken with certain medications.

Sometimes these reactions can be deadly.

You Could Win a FREE Cielo Keychain Pill Holder!

One winner will be announced on December 19 – just in time for Christmas!

12 Medications You Should Never Take With Alcohol

Since metronidazole is an antibiotic, I could have lumped it in with the others in #1. But this one is SO important that I have to call it out separately.

SERIOUS WARNING: If you drink alcohol with the antibiotic metronidazole (Flagyl), you will become sicker than you have ever been in your entire earthly existence. You will never ever want to drink alcohol again. Consider yourself warned.

If you’ve taken opioids, you know they can cause extreme drowsiness, sleepiness, and sluggishness. Another side effect of opioids is that they cause the heart, to sloooowwww down. Alcohol is a depressant. Combining the two may cause your heart and breathing to slow down too much which increases the risk of accidental overdose and death. Over 30,000 Americans died from opioid overdoses in 2015.

NSAIDs can tear up the lining of the stomach, and so can alcohol. Taking alcohol with NSAIDs can increase the risk of a gastrointestinal or GI bleed, especially in older people.

The pain reliever Tylenol and cholesterol drugs called statins are some of the most widely used drugs in the world. Unfortunately, they can be pretty rough on the liver. The liver is where these drugs AND alcohol are broken down to be removed from the body. When too many substances are competing for the liver’s services, it becomes overwhelmed which can lead to liver damage.

When taken with antidepressants, alcohol can actually increase feelings of depression. This can be dangerous for people already feeling hopeless. Mixing antidepressants and alcohol can also cause extreme dizziness or drowsiness, reduce a person’s ability to protect him or herself, and reduce the ability to remember.

The job of a blood thinner like warfarin is pretty self-explanatory: it thins the blood. Alcohol also thins the blood, which makes it potentially dangerous to mix alcohol with warfarin. If blood is too thin, a person can have internal bleeding.

Nitroglycerin (for angina or chest pain) and isosorbide (for blood pressure) are called nitrates. Nitrates work by relaxing the blood vessels so that blood flows through more easily and blood pressure is lowered. ED drugs like Viagra and Cialis work the same way.

Alcohol can increase the effects of these drugs, resulting in dangerously low blood pressure especially when going from sitting to standing.

I mentioned before how much I love a great hot toddy when I have a cold, but not if I’m also taking cold medicine.

Also, many cold and allergy medicines may contain Tylenol or NSAIDs for pain relief too.

Obviously, sleep aids are designed to make you sleep. Therefore, they make you extremely drowsy. The effects of alcohol can cause dangerous levels of drowsiness and trouble breathing. Plus, it can cause problems with memory.

The list above is not complete. For more information, visit the National Institute on Alcohol Abuse and Alcoholism (NIAAA) website.

Okay, YFPHP are these drugs I REALLY can’t take with alcohol? Or is it just that I shouldn’t take them with alcohol?

As always, you are free to make your own decisions, but I’d highly recommend considering the risks I’ve outlined and the statistics on ED visits for drug-alcohol interactions.

You don’t want to be one of the 25,000 people that end up in the hospital (or worse) for medication and alcohol-related side effects.

Save that glass of wine for later, my friends.

Since all of us have to adjust our alcohol intake due to a medication every now and then, drop your favorite virgin (non-alcoholic) drink in the comments below!