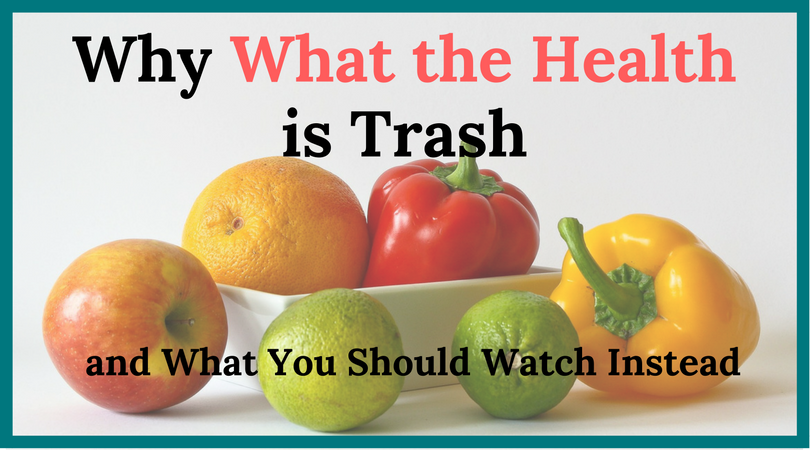 This one’s a little different for Your Friendly Public Health Pharmacist. I’ve been itching to get this out, yet I questioned whether YFPHP would be the appropriate outlet. This post isn’t about drugs and is relatively controversial, but public health isn’t restricted to one category, and it is often controversial. I think it’s a topic worth discussing and hope my readers do as well.
My timelines and newsfeeds have been utterly swamped with revelations about the Netflix documentary, What the Health. I’ve read friends’ pledges of veganism and seen followers’ vows to limit consumption of meat and other animal products after watching WTH. Still, others immediately wrote WTH off as overhyped vegan scare tactics, warning their friends and followers not to believe everything they see. I see all as valid reactions and responses.
A number of my personal friends have asked about my opinion on WTH, considering my recent dietary changes.
In January 2017, I adopted a vegan diet. I’ll talk about what sparked this transition a little later. Suffice to say, I learned much more about the American food system and its impact on health and decided that I wanted to eliminate animal products from my diet.
Fast-forwarding to the present day, I no longer refer to myself as a vegan. I never gave up eggs. On occasion, out of sheer convenience, necessity, or, truthfully, desire, I will eat fish and seafood. And though I remain overwhelmingly dairy-free, I am not above eating a dairy-containing dish in the absence of other options if the dairy cannot be removed. I prefer not to label my dietary habits at all because people take food so personally and react so strongly, but if I had to, “dairy-free pescatarian” would probably be the most fitting.
Though I am not vegan by definition, I am sympathetic to (most) vegan principles and believe veganism is sustainable, ethical, and a reasonable path to health. I also believe that most Americans would benefit from reducing, if not eliminating, animal products from their standard diets.
Please keep in mind the perspective I am speaking from in this opinion piece: that of a health care professional and that of someone who believes in the major contribution of dietary choices to health status.
So.
I watched WTH a few weeks ago after noticing the incessant hooplah on social media, and I must say that I was incredibly disappointed. To me, What the Health is an awful documentary and does a tremendous disservice to vegans and proponents of veganism. I have so many thoughts on why this documentary is a fail, but I’m just going to share my primary, overarching concerns. There actually are some real gems woven into WTH – the fallacy of milk intake as the ultimate measure of strong bones, the spread of antibiotic resistance caused in part by wide-scale administration of antibiotics to animals that humans consume, diet-induced obesity, high-calorie diets as an underemphasized contributor to diabetes (though WTH’s minimization of the role of sugar in diabetes is irresponsible at best). There are more  nuggets than I’ve mentioned, but the audience is so distracted by the exaggerated and dramatic fluff that the rational points are overpowered and drowned out.

We should be concerned about the influence of Big Agriculture on America’s dietary recommendations. Would we not be raising eyebrows if the National Rifle Association gave money to the people who make gun laws (oh wait…)? Would we not be in an uproar if the tobacco industry dictated smoking recommendations? Don’t people lambaste government agencies for their relationships with Big Pharma – financial and otherwise? Why is food any different?
I get it. People are touchy about food. Food is a social and cultural staple of life that we hold near and dear to our hearts. It is our sustenance and links us to our childhoods and families. Food and food-associated fellowship brings us joy and pleasure. So to be told that our entire way of eating may be unhealthy, or at least suboptimal, is disconcerting and off-putting.
It is for this very reason that when educating and informing about alternatives to eating animal products and the rationale for veganism, proponents have to be cognizant of these ingrained food associations.
What the Health misses the mark on this note. Earlier, I mentioned that I began experimenting with veganism this past January. The spark for this decision was another Netflix documentary called Forks Over Knives. If you are a health care professional, science-minded individual, or just someone who values research-based information, I would highly recommend checking out FOK. Especially for those who don’t have much experience with vegan ideals, WTH is not the greatest introduction.
As I’ve told several friends, had WTH been the first documentary I watched about a plant-based diet, I would have been skeptical and completely turned off by the entire concept. I’m not here to convince you to change your eating habits, and I’m not saying that every notion presented in FOK is 100% true. But if you were considering checking out the WTH hype, I’d surmise that FOK would be a better use of your time and present you with a more well-rounded and scientifically-based perspective. FOK presents physician-led case studies, epidemiological data for considerations , international comparisons, and offers insight into what foods Americans could eat in place of animal products.
There’s also always the oldie-but-goodie Food, Inc.
Even better though, for anyone who is able and has the time, I encourage you to do the research on your own and draw your own conclusions.
Did you watch What the Health? What did you think? Are there any other food-oriented documentaries you’ve enjoyed?
As always, thanks for reading!
– YFPHP